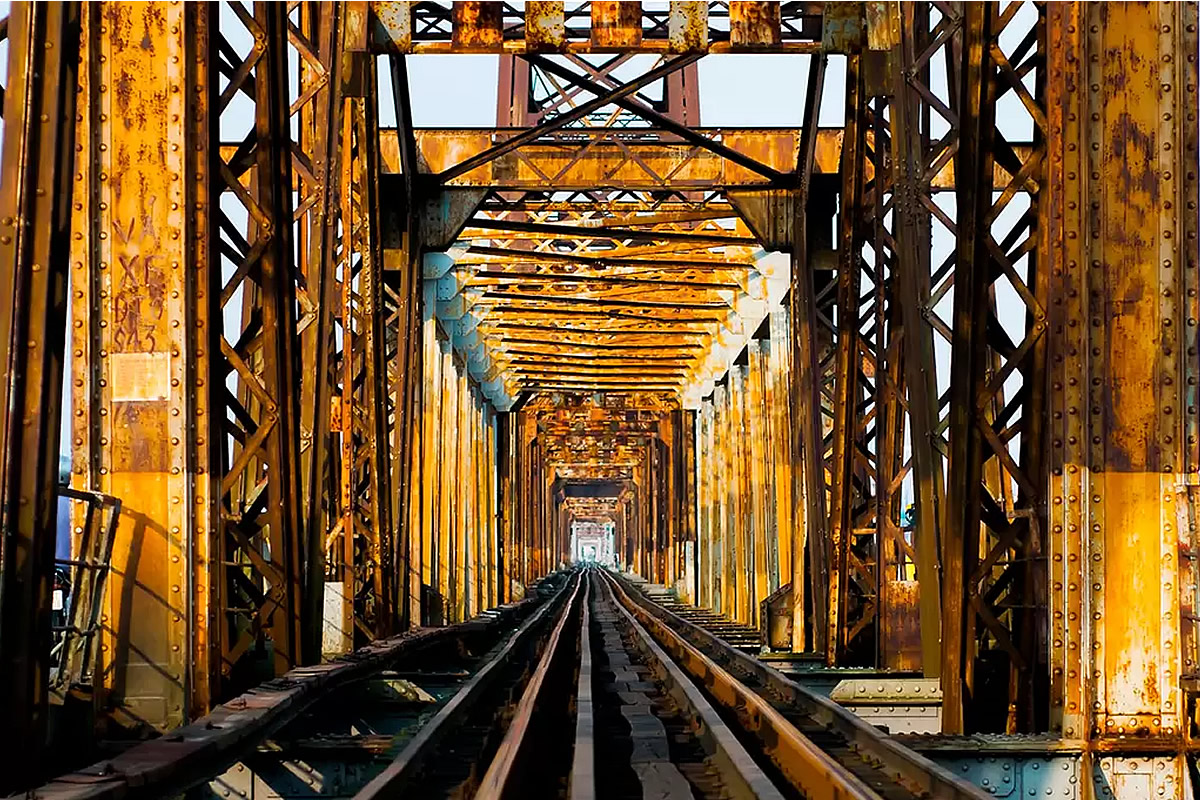 Long Biên Bridge, connecting past and present in Hà Nội

Withstanding the test of time, the past can still be seen on each span of the iconic bridge, an invaluable part of the history of the city.

On September 13, 1889, the Governor-General of France in Indochina held a groundbreaking ceremony for a bridge crossing the Hồng (Red) River. Its construction area was chosen to be the spot from which the French ship aimed fire at Quan Chưởng and Bắc (Northern) Gates, the entrances to the capital city.

The bridge was designed in the style of the keys that the French contractor Daydé & Pillé Company applied for the first time to Tolbiac Bridge in Paris. It has a length of 1,862m, consisting of 19 steel beams and a stone path. There is a single railroad track for trains in the middle and both sides have pathways for motorised vehicles and pedestrians.

The steel bridge was the four-largest and the second-longest of its kind in the world at the time, after the Brooklyn Bridge in the US.

The bridge was officially inaugurated on February 28, 1902, after nearly three years of construction and was named after Paul Doumer, the French Governor-General of Indochina. It was renamed Long Biên after the liberation of the capital city in 1945.

The construction of the first steel bridge in Việt Nam took the efforts of thousands of Vietnamese workers under the guidance of French experts. In addition to tons of lime transported from Thừa Thiên-Huế, 30,000 cubic metres of stone and ironwood blocks were brought from Thanh Hóa and tons of cement from Hải Phòng.

Vietnamese workers also created tens of thousands of rivets needed for the bridge and dived deep into the river to construct its abutment, 30m below the surface of the water.

According to architect Đào Ngọc Nghiêm, former director-general of the Hà Nội Department of Planning and Architecture, Long Biên Bridge was imbued with national identity even though it was a modern architectural heritage at that time, as the French gave it the shape that resembles a dragon flying over the Red River, which is associated with the cultural symbol of Hà Nội.

Over time, the bridge has stood to assist the people of the capital during resistance wars against the French and Americans, becoming a symbolic part of Vietnamese history.

During the war, it was bombed 14 times, damaging nine spans and four piers, but was immediately repaired and preserved to ensure traffic circulation and important shipments could continue to support the southern battlefields.

Spanning past and present

Though many modern and grand bridges have been built crossing the Red River, like Thăng Long, Thanh Trì and Vĩnh Tuy, Long Biên Bridge has never lost its place in Hanoians’ heart.

It is loved so much that a French overseas Vietnamese launched a festival dedicated to Long Biên Bridge – Ký Ức Cầu Long Biên (Memoirs of Long Biên Bridge) – in October 2009. The legendary bridge of Hà Nội has become a protagonist in cultural events.

Every morning, long lines of street vendors selling fresh vegetables, workers or students can be seen travelling back and forth on the bridge, just as they have done for over a century.

Teenagers, expats and tourists alike love to walk across it on the weekend, buying boiled corn or charcoal-grilled sweet potatoes.

Long Biên Bridge is still considered one of the most beautiful bridges in Hà Nội, thanks to its unique nostalgic appearance.

“Standing on the bridge, you can have the best view of sunrise or sunset in the city. Many brides and grooms also choose it as the backdrop for their wedding photos,” said Nguyễn Trường Sơn, a resident of Long Biên District.

Through the many ups and downs of history and time, the bridge has seriously deteriorated. Hà Nội’s authorities are working on several proposals that aim first and foremost to preserve the icon of the city.